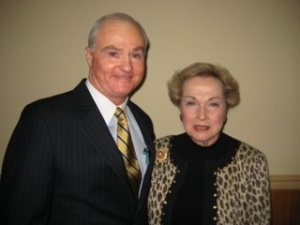 Back on Sept. 25th I posted about the bad blood and animosity between the two Monmouth County Republican Freeholder Candidates, Lillian Bury and John Curly. I mentioned how Burry and Curly did not get along and that the both could not stand each other. I also mentioned that Curly was snubbed by Burry and was not invited to a fundraiser of hers.

Well, it seems as though the bad relations between the two have been noticed by others. The Asbury Park Press’s Bob Jordan wrote about it in yesterday’s paper:

“Republican Lillian G. Burry is running for another term as a Monmouth County freeholder, but don’t go to the Burry campaign Web site’s five pages of text and 21 pictures if you want to learn about her running mate.

That’s because John P. Curley isn’t mentioned on the site or included in any of the photographs. Indeed, there is no hint that the Republicans have a two-candidate ticket in the Nov. 4 county elections.

The county elections annually feature heated Democrat versus Republican contests, but this year’s version has added Republican vs. Republican fireworks.”…

This obvious split between the republican ticket should be a boost to their democratic rivals Glenn Mason and Amy Mallet, dissention amongst the ranks this close to an election is never good. Lets see if Mason and Mallet can capitalize on it.