>Over on his “new” blog provided by Middletown-Patch, Middletown’s acting mayor Tony Fiore, has addressed the latest robo-call that was sent out by the group Concerned Citizens Of Middletown, that talked about the amount of debt the Township is carrying. If you ask me, Fiore’s response just lends credence to the message that went out last Friday.

His answer is the same stock answer that has been given many times before but only this time he providers a true debt number of $72million that so many before him have been reluctant to confirm! 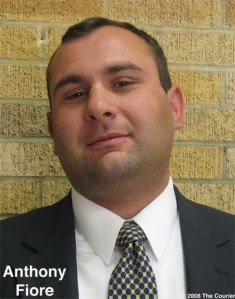 And how is it that Mr. Fiore is so sure who is responsible for these robo-calls when so many (myself included) do not? He blames the Middletown Democrats for placing them, which if that was the case, I think I would know about it. It seems to me that these robo-calls have struck a nerve and seem to be factual based by his response to them.

Also I believe, the point of how much debt the town can borrow itself into, is a silly one; who cares what a towns’ or persons’ credit card limit is when it is already difficult to meet the minimum payments on the balance!

Middletown hasn’t had it debt rating updated in several years, It has been shown recently that credit rating agencies like Moody’s and Standard & Poor aren’t worth much. After the financial meltdown of the past few years, many of the investments that caused the near collapse of the economy were rated A, AA, or AAA from both of these institutions. Knowing that why would anyone want to tout how special they are? They’re not.

On the final point about the blocking of a return phone number, I don’t know what Fiore is talking about, unless he wants to incite others into believing that these messages have no integrity, which I’m sure is his intent, he is living up to him nick-name of the “Fibber”. Every call that I have received by Concerned Citizens of Middletown, including Friday’s, had a return number left on my caller-id.
True it wasn’t a Middletown phone number or one from the immediate area (I think it was Dunellen), but there was in fact a phone number associated with the call.
On a side note – I don’t know how Fiore’s blog on Middletown-Patch works, but this posting was dated Tuesday May 24 at 12:58 PM, right in the middle of a busy work day. Doesn’t Tony have a job that he needs to attend to at 1pm in the afternoon? True, he may have been on his lunch hour but I think not. Working on Township business (which this clearly is), on company time is a No-No as everyone knows.
I wonder what his employer would think????