My son Ryan’s car came in 1st place for the Weeblo #2 den. His car will now represent thePack 242 and the Weeblos at the Monmouth County regional finals later this year.

This is the first car that either of my sons have made, in the 12 years or so that they had been involved in scouting that has come out of the Derby as the winner of their group. The average heat time of this car was 2.46851 seconds, which was very impressive. 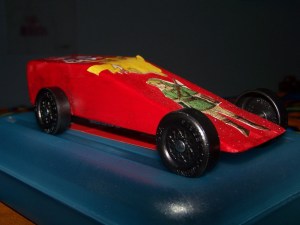